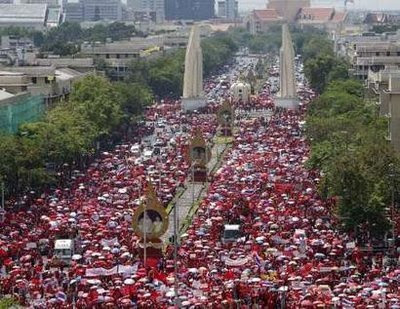 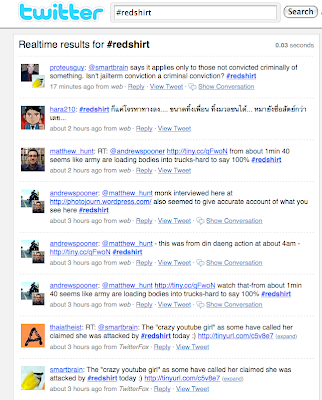 I've been following the twitter feed on #redshirt for a week now (since April 11, the day the red shirt demonstrators invaded the Pattaya resort hosting the ASEAN meeting). (See an earlier post on the civil unrest there.) It's been truly fascinating in many ways.

(It's a big disadvantage, of course, not to be able to read Thai; so there is a segment of the feed that I can't address at all.)

Here are a few things I've gathered in the week of reading. I've become familiar with a couple of voices -- bangkokbill, andrewspooner, anitchang, smartbrain, piriya ... I've learned a bit about the timing of events in Bangkok during the Sunday and Monday showdown with the government. I've probably gotten a bit of the flavor of the issues and emotions that divide the contending protest movements, red and yellow. I got some useful links to valid news and academic sources on the conflict.

And I've viewed the controversy about who is REALLY dominating the twitter feed -- yellow shirts or red shirts. Andrew Spooner is out front in asserting that yellow shirts are spinning the facts in the twitter feed; others characterize him as "pro-red shirt" and biased in that direction. It's gotten a bit personal -- maybe it's a good thing Spooner is off on a travel article assignment. But actually -- I'm not seeing the evidence of bias that Spooner sees.

Another interesting aspect of the feed -- there are only a few eye witness real time comments from the streets -- certainly few compared to the ongoing commentary by the regulars. And there appear to be no real time reports from participants -- red shirts or conceivably cops and soldiers.

The biggest issues of debate that people are clashing about on twitter are important ones. Did the government use more force than necessary? Were there more deaths than the four that were reported? Were more bodies secretly taken away? (This is a persistent theme in Spooner's postings.)

Spooner makes what sounds like a valid point about access -- it makes sense that poor people who might support Thaksin are less likely to have access to twitter and the Internet. But since you can tweet straight from a cell phone, this doesn't seem to be much of a barrier. There are a lot of cell phones in Bangkok!

What never really gets addressed directly is the extent of mob violence exerted by red shirts on several occasions last weekend: the invasion of Battaya, invasion of the ministry of interior, smashing of the vice minister's car and serious beating of the official himself, and the burning of numerous buses. All of this is well documented in the press and on YouTube -- but almost never mentioned in the twitter polemics.

And of course there's the mysterious assassination attempt on the life of a former official, Sondhi, who was a prominent figure in the yellow shirt demonstrations in the fall -- some mention of this shooting on the twitter feed but no real news.

What is truly fascinating about the demonstrations in Bangkok this past week, and the twitter feeds that emanated as a result, is what it suggests about the future. Imagine that 10% of demonstrators contribute comments and feelings every few hours; imagine the freelance commentators and partisans are putting in their interpretations; and imagine the parties and the government make an effort to chime in and provide spin, interpretation, and misinformation. This would be a torrent of as many as four thousand tweets an hour for an extended time -- perhaps 350,000 tweets to make sense of in a week. What a data-rich cacaphony for the journalist, the sociologist, and the intelligence analyst to try to make sense of. Thailand 2009 isn't the twitter revolution -- but maybe the next one will be. 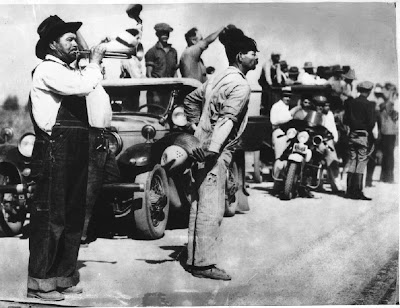 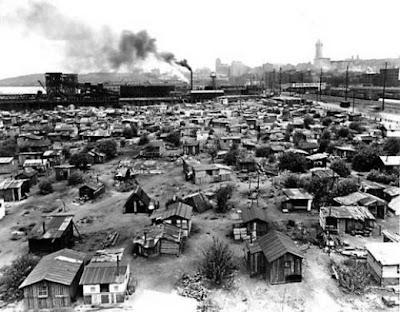 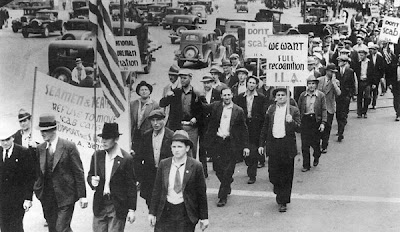 We've seen several waves of hardship for working families in the past eight months in many parts of the U.S.: mortgage foreclosures, job losses, reduction of hours of work, and pressure by employers on health benefits. And state governments around the country are under huge fiscal pressure, leading them to attempt to cut support for social programs and important social services. And many of those governments are themselves laying off state workers. So there is already an unprecedented level of economic and personal distress in the country.

But no one seems to think that we've seen the worst this recession has to offer. So what's next?

One part of the story seems pretty clear. There will be more layoffs, more plant closures, and more business bankruptcies in the coming six months. So more families will suffer the pain and dislocation of job loss. The national unemployment rate is officially estimated at 8.5%, and economists expect it to rise above 10%. This means another two million job losses in the coming year or so. And each unemployed person affects several around him or her -- dependent children, spouses, college-age children, even aging parents. That amounts to several million more people about to be affected. (Here's a link to the Bureau of Labor Statistics.)

It also seems likely that many more people will lose their homes through foreclosure. (Here's a recent map of mortgage delinquency rates based on data compiled by the New York Federal Reserve Bank.) 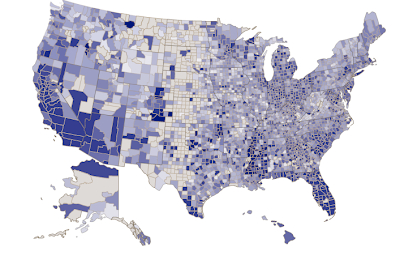 It would take more of an expert than me to try to guess what surprises await us in the financial sector -- how many more failed banks, how long the credit drought will continue, how much resistance distressed home mortgage holders will meet in efforts to renegotiate their loans and try to keep their homes. But it doesn't seem likely that banking and finance have seen the worst yet.

We can pretty well predict that services and support for urban poor people will diminish further, as state budgets contract along with the economy. And public health experts can probably estimate the effects that contraction will have, on the health and nutrition status of poor communities. And what happens to whole communities when unemployment benefits begin to run out? How will food pantries and private services cope with increasing urgent need?

And what about worker militancy? Isn't it somewhat surprising that there hasn't been more of an organized reaction in the United States to all these shocks by the ordinary people who are experiencing them? Is it possible that this passivity and acceptance will begin to change as the months of hardship wear on into years of reduced quality of life?

The photos above are from the 1930s, the period of the Great Depression. The point here isn't that we're approaching a similar time. It is simply that economic hardship is real, and it forces new kinds of social action and private strategies of self-preservation.

I suppose the hope everyone shares is that the economy will reignite. Demand will begin to recover; businesses will start to rehire workers; new investments will be made that result in productive innovations. And public revenues will begin to recover as well, as family incomes, business profits, and property values start to recover. So we'll be able to pay for the social services we want and simple fairness demands.

Somehow, though, that recovery seems a long way off. 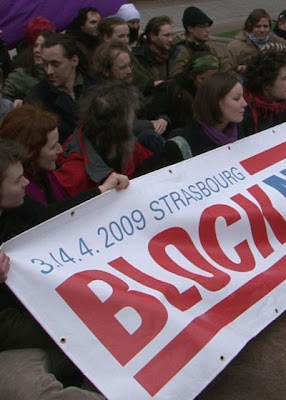 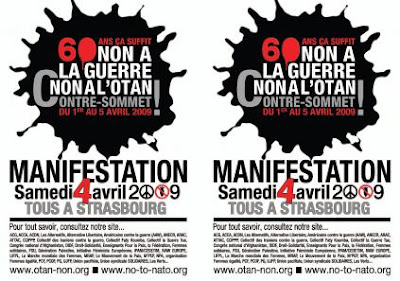 There are organized and escalating protests taking place against the NATO summit in Strasbourg this week (news; news; Aljazeera report). Calls for protest have come from anti-war and leftist organizations throughout Europe, and there is rising concern in the French and German press about the possibility of violence in the streets. These concerns are realistic, since clashes between demonstrators and police have taken place already in the past twenty-four hours.

These protests are separate from those taking place in London at the G20 meetings, and there appears to be an escalating cycle of violent clashes between demonstrators and police and security forces. Various European anti-war organizations have been mobilizing to bring their supporters to Strasbourg -- for example, see this website for Manchester Stop the War Coalition and this call for action from Americans for Peace and Justice (posted in Italy).

What is the composition of the protest movement in Strasbourg today? It would appear to be largely organized by anti-war and pacifist groups; groups who are opposed to European involvement in Afghanistan; some groups protesting the recent war in Gaza; and, presumably, a scattering of anti-globalization and anarchist groups from various parts of Europe. Anti-NATO demonstrations have taken place with some regularity in a variety of locations in Europe in the past year.

President Obama will be visiting Strasbourg and Baden-Baden this week for the NATO conference, and security in the city is very intense. The French public is very tuned into the developments that are taking place in the city. There will be a great deal of American and European attention to his visit. It is very striking, though, that there is virtually no coverage of the protests and clashes that are currently taking place in Strasbourg in the American press. The New York Times appears not to have covered the story, though it has covered the NATO conference itself.

It would be very interesting to use the tools available on the web to do a sociology of the protests taking place today, based on the links it is possible to discover among organizations through websites and calls for mobilization. Sidney Tarrow is one of the contemporary social scientists who has made a substantial effort to provide detailed analysis of the networks and organizations that have converged in anti-globalization protests in the past decade or so (The Global Justice Movement: Cross-national And Transnational Perspectives