Unemployment across the US 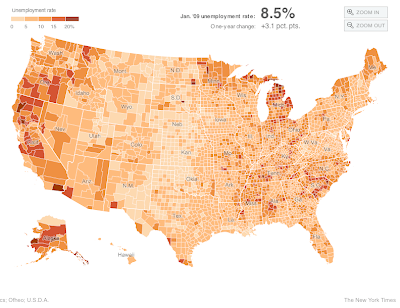 There is a good interactive map of unemployment rates at the county level across the US in the March 29 New York Times. Here is a snapshot, but be sure to visit the Times site for the interactive version. The map is based on January 2009 data, and it represents a national rate of unemployment of 8.5%. But there is a tremendous range across regions and counties.

There are many noteworthy details on the map. Northern California and Oregon somewhat surprised me; Harney County, Oregon, has a rate of 19.7% unemployment, and Trinity County, California, has a rate of 20.9%. These are staggering numbers for these locales.

My own state, Michigan, has a very wide range of unemployment rates across both rural and urban counties. Wayne County, home of the city of Detroit, has a relatively high rate of 14.2%, and Genesee County, home of Flint, also has a high rate (14.8%). (By comparison, Onondaga County, home of Syracuse, New York, has a rate of 7.4%.) Several Michigan counties with mid-sized cities show relatively low unemployment rates: Washtenaw County (Ann Arbor), Kalamazoo County (Kalamazoo), and Kent County (Grand Rapids) have relatively low rates (7.3%, 8.4%, 9.8%). But several other counties in the state show rates in excess of 18%: Cheboygan County (21.8%), Baraga County in the Upper Peninsula (23.4%), Sanilac County (18.9%), and Iosco County (18.5%). What this shows is that the unemployment crisis is not evenly distributed across the state or the region; some counties are much more seriously affected than others. And some of the highest rates are in counties with agriculture and extraction as primary industries -- manufacturing counties in Michigan are generally in the middle rank.

A quick visual inspection suggests that Michigan and South Carolina are the states with the highest proportion of high-unemployment counties; California and Oregon are also clearly on the high end of the unemployment crisis.

The tool also allows the user to select for rural, manufacturing, metropolitan, and "housing bubble" counties.

I suppose that the central truth that this map supports is the fact that the employment crisis has affected regions and economic sectors very differently -- across large regions and within states. So here, as with so many social variables, it is important to disaggregate the national and state data, to get a better idea of the range of effects a given economic circumstance is creating for individuals and families.

Impact of the crisis 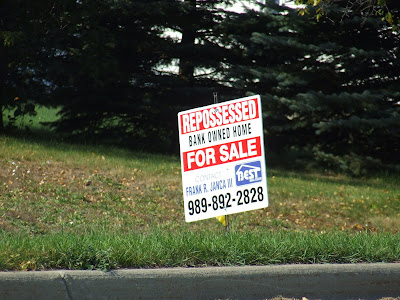 We're now months deep into a financial-economic-employment crisis across the country, and it's especially severe in Michigan. What are some of the real impacts of this economic downturn on ordinary people?

The most visible impacts are on jobs and homes. Michigan's unemployment rate has increased sharply in the past three months, to a current national high of 11.6 percent in January. There have been large layoffs in the auto-related industries in the state, and non-automotive businesses are now reducing their workforces as well as a result of reductions in business and consumer spending. Restaurants, retail shops, law firms, and accounting firms are eliminating positions, so job insecurity extends across the blue collar and white collar spectrum.

The loss of jobs feeds into a worsening mortgage foreclosure crisis in Michigan. Even before the surge on job losses Michigan had a high rate of troubled mortgages. That number now threatens to increase as a result of families' loss of income, though there are a variety of new measures designed to help families to hold onto their homes.

A measure of the social distress for families in Michigan is the volume and nature of 2-1-1 calls that have been received over time. (2-1-1 is a growing national service in many areas that provides referrals to agencies and other resources for families and individuals facing difficult issues.) The United Way of Southeast Michigan provides detailed reporting of the volume, subjects, and demographics of its callers (link), and the results over the past 12 months are striking. Calls received in January 2009 are up by 30% compared to January 2008, at 22,518. The top five services for which referrals were provided included utility assistance, food, housing, temporary financial assistance, and employment. And emergency food providers such as Gleaners report a sharp increase in the amount of demand for their services in the past six months.

So how about the 80-85% percent of Michigan families who are still employed? (In addition to the 11.6% of people who are officially unemployed, there is a population of "hidden" unemployed people who are not counted in the official unemployment figures.) How has the crisis affected the majority who have not lost their jobs? It's pretty clear that just about everyone in Michigan has been affected by the crisis. Anxieties about retirement investment accounts are at the top of the list -- especially for people in their fifties or older. But a second major anxiety stems from job insecurity. With all the bad economic news, whose job will be the next to go? There is worry too about employers' health benefits -- will these benefits continue in their current form in the current economic environment? And these anxieties have led people to rethink their spending and consumption habits -- leading, of course, to less demand in many sectors and perhaps another round of job reductions. Sales tax collections in Michigan fell by 18% in February from January; this is a direct indication of sharply reduced consumer spending (link). (Here is a report from the Chicago Federal Reserve Bank describing recent trends in Michigan retail sales.) And major purchases like automobiles and trucks seem to be on hold -- witness the roughly 50% drop in demand for cars and trucks in recent months.

Another hardship that many families are experiencing is the frozen credit market and the stagnant home sales performance. Families who need to sell their homes are finding that there are few prospective buyers. And families looking to buy a home or a car may have substantial difficulty in finding a lender to provide the mortgage or car loan.

Add all these problems to a chronic American issue -- the lack of medical insurance for upwards on 50 million Americans -- and you have a rising financial and personal crisis for thousands of households in Michigan: how to pay for medical treatments when health benefits go away, or when you don't have insurance at all. Unreimbursed care has increased sharply in hospitals in Michigan, resulting in severe financial pressures and the need for further cost-cutting; health systems in Michigan are currently laying off workers to adjust their budgets to current revenues.

So the impact of the current recession is sharply differentiated between people who have lost their jobs and those who haven't. The first group is in serious, daily distress, having a hard time keeping their families provided with the necessities of life. The second group probably divides into segments with different levels and kinds of anxiety -- those who have realistic fears of losing their jobs in the next wave of layoffs, those who are concerned that they may lose lose benefits or wages in the next year or so, and those who are anxious about the future value of their retirement savings. And it all adds up to a set of communities that are being forced to cope with a wide range of personal hardships, almost across the board.

This is a difficult posting to write. The impetus comes from an exhibit presented by the Jim Crow Museum of Racist Memorabilia at Ferris State University in Michigan (link). The curators have put together a set of artifacts that capture horrific attitudes towards African-Americans, Asians, gays, women, and other individuals and groups in American society, extending over a century of our history. There are photos of mass rallies of the Ku Klux Klan in the midwest; images of the lynchings of Emmett Till and other African-American victims; t-shirts with racist images of blacks, Jews, Asians, Latinos, and gays; photos from the scene of the Oklahoma City bombing; and recent examples of racist depictions of President Obama. And, of course, it's not just about iconography; it's also about real violence against individuals from these groups. Hate-based murders continue to occur in the United States.

Just viewing these images is a profoundly disturbing experience. But here is the really difficult part: our society continues to embody these strains of hatred somewhere. And it continues to reproduce these hateful beliefs and attitudes for the next generation. We want to imagine that our society is peace-loving, tolerant, respectful of difference, and ultimately "good neighbors" for all members of our society. And this is certainly true for a very high percentage of Americans. But the exhibition makes it all too plain that this is not the case for everyone. There are individuals, and more importantly, there are groups, for whom racial, sexual, and religious hatred is a fundamental social and psychological reality. As investigators for the Anti-Defamation League (link) and the Southern Poverty Law Center (link) have documented, these extremist groups continue to exist, and they continue to recruit new adherents using sophisticated social media (web pages, video games, chat rooms), as well as more old-fashioned means of mobilization.

How are we to come to grips with the idea that some of our fellow citizens -- in our own communities, in our state, and in our country -- have such despicable attitudes and behaviors towards other human beings? And what precautions should our society take to defend itself against the violent manifestations that these attitudes and groups sometimes lead to?

It seems that schools have done a pretty good job of conveying the values of racial equality and social tolerance to our children. This has been an important priority for the past several decades. But at the same time, the hatred documented in the exhibits mentioned here can still be found among young people as well -- not just gun-toting aging militia types. (Here's a resource on youth hate crimes.)

We would all like to imagine that the twenty-first century is going to be a better time than the twentieth century. And a big part of that hope is the idea that hatred and violence between groups will subside, replaced by the values of tolerance and civic equality. Anti-semitism, racism, hatred of gays and lesbians, and the forms of violence that are associated with these attitudes, must disappear. It is tough to be reminded how far we are from that ideal in the first decade of the new century.