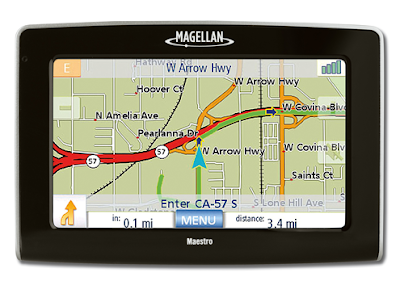 Wouldn't it be interesting if our GPS units gave us basic social data about the spaces we pass through, along with advice about where to find the closest fuel stop? This would function as a sort of "social reality meter" that would render more visible the social realities and human inequalities we traverse as we travel.

Such a device is entirely possible. It would require a spatially coded social data base, including characteristics such as infant mortality, high school completion, poverty, crime, single-parent families, home ownership, property values, and as many other characteristics as we might be interested in. These features would be attached to a geographical location (a census tract, for example, with a boundary file), and the map would dynamically display several selected variables as we travel through the region.

This kind of GIS mapping is commonplace on the desktop. (See ZipSkinny and SocialExplorer, for example.) But putting it into a mobile device -- a GPS unit in the car or a GPS-equipped cell phone -- would be a way of greatly extending our perception of the social landscape around us.

Here's a possible snapshot of violent crime data as we drive across Chicago: 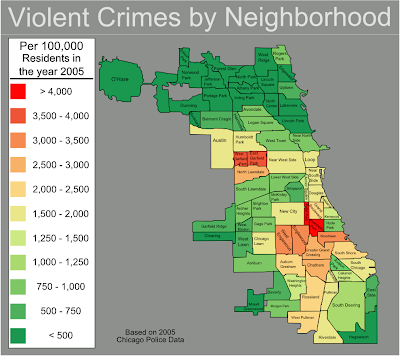 Or a drive through Washington D.C. showing the patterns of unemployment in the metropolitan area: 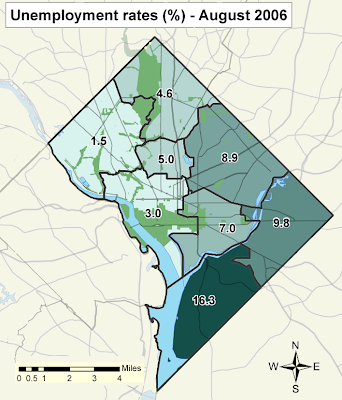 Or this drive through Cleveland observing the distribution of poverty across the city (measured by eligibility for food stamps): 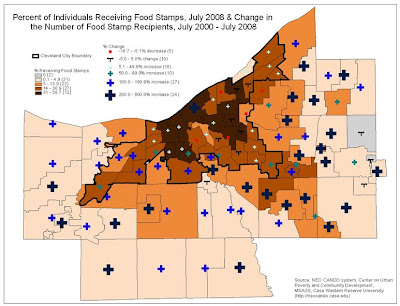 The idea is "location-based social awareness" using the same technologies that cell phones and GPS devices currently use to keep track of local points of interest or "locations of your friends right now"; but providing the user with enormously greater ability to "sense" the social landscape around him or her. Socially conscious iPhone programmers -- how about it!

Wealth in the United States 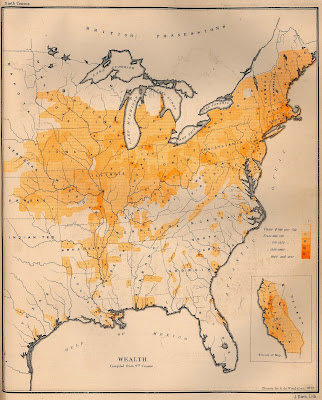 So how is wealth distributed spatially across the United States?

Here's a quick effort at analyzing the Forbes list of the top 400 wealth holders in the U.S. Here is a snapshot of the graphic included on the page: 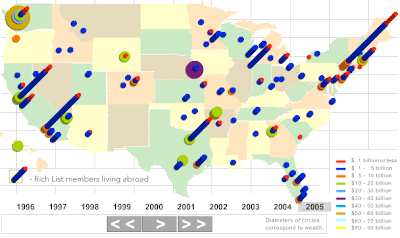 It is logical enough that there is a great concentration of these wealth holders in a few important cities -- Chicago, Los Angeles, Dallas, Houston, San Francisco, New York, Boston. But this snapshot is of limited value in helping us get a handle on the social geography of wealth. It tracks only the very tip of the wealth iceberg.

We might take a different tack and try to use the concentration of million dollar homes across the United States as an index of the concentration of great wealth across space. Unfortunately, I can't locate a convenient data source that provides this information -- though it's probably not too difficult to find. But here's a related approach. The map provided below represents counties by their median home rental prices; this ought to be a reasonable proxy for house values. So we might reason that the highest home rental counties are also the counties with the highest income. 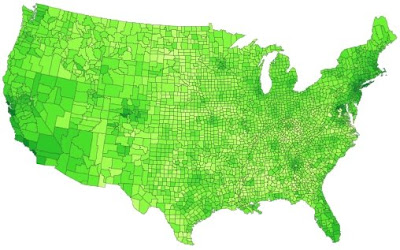 It would be interesting to see a series of maps on this theme along the lines of the treatment that Richard Florida offers for the spatial distribution of various salient social characteristics -- for example, his maps of the distribution of different personality types across space.