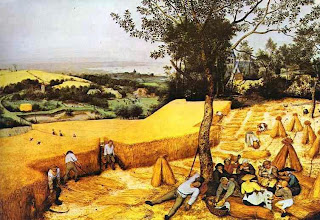 James Gustave Speth has written a really important book on sustainability within a modern society. The book is called The Bridge at the Edge of the World: Capitalism, the Environment, and Crossing from Crisis to Sustainability

, and it's an important contribution. One of the most fundamental conclusions that Speth arrives at is the idea that sustainability will require a truly profound transformation of how we think about a "good life," and a rethinking of the kinds of material circumstances we might aspire to in order to create a world system that is genuinely sustainable.

One way we might try to pursue this line of thought is to consider whether gardens and local biofuel production might provide a basis for more sustainable human activity. Could we use more of our own time and labor to create some of the material necessities of our lives, and do so in a way that imposes a smaller footprint on the world's energy and resource system?

David Blume was a guest on NPR's Science Friday on August 15. Blume is the author of Alcohol Can Be a Gas!: Fueling an Ethanol Revolution for the 21st Century. Blume is an advocate for the idea that alcohol can be a large and ecologically positive component of our modern energy economy (website). And he believes that it is possible to imagine a more decentralized energy economy for the United States in which local producers and distillers satisfy a large percentage of the energy needs of a region.

Blume made an observation that I found intriguing: that the common wetland plant, the cattail, can be a fuel source for producing ethanol. (Here's a news story on Blume's comments about cattails on an earlier occasion.) Corn produces about 250-300 gallons of ethanol per acre, and it is estimated that cattails would produce something less than this. (Blume himself estimates that the yield of cattail ethanol production would be "many, many times" that of corn, and says that 7,000 gallons per acre is feasible. This seems unsupportable, given the potential yield of other biofuel crops.) But cattails also have ecological advantages: they soak up excess nutrients (e.g. agricultural fertilizer runoff or sewage waste plant effluent), and they require little cultivation. Here are a few news stories (story, story) with some interesting background.

So here's the question: what would be involved in creating a community that is energy self-sufficient based on ethanol production? Could households grow their own fuels? What would the economics of a cooperative community-based distillery look like? How much land, labor, and money would be required for the household?

It should be noted that there is serious disagreement about the most basic features of the commercial ethanol economy: does ethanol production lead to a net gain in energy, or do the inputs into the cultivation and distilling processes exceed the energy content of the resulting volume of alcohol? Here's a discussion at FuturePundit and a summary of the findings of a national expert, David Pimental from Cornell University. Here are the central conclusions of a recent study by Pimentel and Tad Patzek at UC-Berkeley:

Turning plants such as corn, soybeans and sunflowers into fuel uses much more energy than the resulting ethanol or biodiesel generates, according to a new Cornell University and University of California- Berkeley study. "There is just no energy benefit to using plant biomass for liquid fuel," says David Pimentel, professor of ecology and agriculture at Cornell. "These strategies are not sustainable."

But still, let's think it through a bit. The scenario I'm imagining is labor-intensive and local, so the costs of energy associated with mechanization and transportation are reduced or eliminated. Could we imagine a local energy economy based on crops and distillation that could be fitted into an otherwise acceptable lifestyle? (The analysis will begin to sound like Piero Sraffa's exercise, Production of Commodities By Means of Commodities: Prelude to a Critique of Economic Theory

A family's energy budget might look something like this, estimated in gallons of ethanol:
This adds up to 2,400 gallons of ethanol required for a year's energy use. But we aren't finished yet, because cultivation and distillation also have an energy cost, and this cost is a function of the volume of alcohol required. Let's take a more optimistic estimate than that provided by Pimental above, and assume that the energy cost of distillation is 30%. (We're working with a coop, after all!) To produce a gallon of ethanol we have to expend .3 gallons in the distillation process. And let's assume that cultivation is done by hand without mechanization, but that the crop needs to be transported to the distillation facility at a 10% cost. (That is, I assume that the net transportation cost of transporting the thousands of pounds of feed crop to the processor is 10% of the net alcohol product of the crop.) These estimates imply that the household requires 4,000 gallons of alcohol.

Now assume that the alcohol yield of an acre of cattails is 250 gallons; this implies a fuel farm size of 16 acres. (It would be nice to extend the exercise to include a food garden as well; this is left for the reader! Here's an interesting United Nations article from the 1980s on the economics of family gardening that can help get the analysis started.)

Now how many hours of labor time need to be devoted to cultivating and harvesting this crop? Evidently cattails don't require much by way of fertilizers, irrigation, and pest control. But I'm sure there is some level of maintenance needed, and 16 acres is a large area. In fact, it represents a rectangular plot that is 200 feet by 3,500 feet -- more than half a mile long. So let's assume that basic maintenance of the cattail crop requires 2 hours a day of adult labor. The large investment of labor, however, occurs at the harvest. About 14,000 pounds of cattails will be harvested per acre, or 224,000 pounds for the farm over the course of the harvest. If we assume that an adult can harvest 200 pounds per hour, this represents 1,120 hours of harvest work. Let's assume that harvesting can be spread out over a couple of four-week periods or 56 days; this implies 20 hours of adult labor per day during the harvest season. So it would take 10 hours a day, 7 days a week during the eight weeks of harvest season for two adults to harvest this volume of cattails. Two months of very hard work devoted to harvesting will eventually produce enough ethanol to support the household's chief energy needs.

Now what about the economics of the cooperative's distillery? If we assume a cooperative involving 100 households of the scale just discussed, the distillery needs to process 22,400,000 pounds of material in order to produce 400,000 gallons of ethanol. The households will be farming an area of 1,600 acres of cattails -- about three square miles. And the system will be supporting the energy needs of about 500 people. If we keep our assumption of a 30% ratio of input-to-output, this process will consume 120,000 gallons of ethanol. The coop members will need to fund the purchase and maintenance of the still and the labor costs associated with operation of the still. Perhaps it's a labor coop too? In this case, each household will need to devote several hours a week to work in the distillery. And we might imagine that the coop would require a "tax" of some small percentage of the alcohol produced to cover maintenance and operating expenses. Here's a research article from AGRIS that examines the costs of a small distillery of roughly this size. The conclusion is somewhat discouraging: "The analysis indicates that the distillery would not be profitable at current prices for corn and ethanol." In other words, the cost of inputs and operation of the distillery exceed the value of the alcohol produced, according to this analysis. But this conclusion isn't quite relevant to our scenario, because the raw materials are not purchased through the market and the product is not sold on the market. Nonetheless, the finding implies that there's a shortfall somewhere; and it may well be that it is the unpaid labor of the fuel farmers that is where the shortfall occurs.

So here's the upshot of this back-of-the-envelope calculation: it would be a major commitment of land and labor for a household or a village community to achieve energy self-sufficiency through cooperative-based ethanol distillation. And I've made an assumption I can't justify: that the energy input to the distillation process is 30% of the energy content of the resulting quantity of ethanol. If that ratio is 60% instead of 30%, then the land and labor requirements for each household are greatly increased; and if the ratio approaches or exceeds 100%, then the whole idea falls apart. But even on these assumptions, the life style associated with this model sounds a lot closer to that of a peasant village in medieval France or traditional China than to that of a modern US citizen. It involves hard physical labor during several months of the year and a moderate level of labor effort during the remainder of the year. And if we imagine that the scenario is extended by incorporating a substantial amount of food gardening for family consumption, then the balance of necessary labor to free labor tips even further in the direction of the peasant economy.
Posted by Dan Little at 2:00 PM 0 comments